Dementia is the name used to describe the symptoms of a large group of illnesses which cause a progressive decline in brain functioning. People with dementia may have symptoms such as memory loss, difficulty communicating and personality changes. They may also have problems with thinking, behaviour, recognising people and recognising what things are used for. For example a person with dementia might look at a set of keys and not know that they are used to unlock a door. They might say things that they wouldn’t have said in the past.
For a long time, the person might look healthy on the outside, but on the inside, their brain is not working properly. 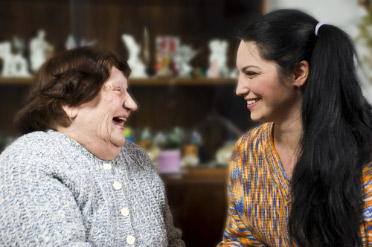 Is dementia a mental illness?

No, it is a neurological condition of the brain. Our brain is our control centre and it controls everything we say, do and think. Everything from breathing to keep us alive, right through to knowing how to ‘bite your tongue’ when you don’t want to offend someone, is controlled by the brain. When the brain is sick, we have problems with all of our actions, including speaking, remembering, making decisions, learning new skills and understanding information.

Is dementia something that ALL old people get?

As people get older, the chances of developing dementia are higher. However this is the same for many illnesses and dementia is not a ‘normal part of aging’. Not all older people will develop dementia, and some younger people will develop it too. Although this is not as common, some people develop dementia in their 30s, 40s and 50s. ‘Younger onset dementia’ refers to dementia that is diagnosed in a person before they turn 65 years old.

How do doctors diagnose dementia?

There is not just one test. Dementia is difficult to diagnose and the younger somebody is, the longer it can take to detect and diagnose. Several different tests must be performed as well as collecting information from the person and their family and people close to them. There are some illnesses that might seem like dementia, but are treatable. These illnesses need to be ruled out before a doctor will diagnose dementia. Doctors don’t want to diagnose someone with an untreatable illness without having ruled out all other possibilities. Because dementia is quite difficult to diagnose, this often means families are living with the impact of dementia long before they even know what they are dealing with. Once a diagnosis has been made, a doctor might be able to say that a person has a particular ‘type’ of dementia.

What are the stats?

You are not alone

On this map, each pin has been dropped by a young person who is dealing with dementia in their family. Click on the map to drop your pin, and let others know that they too, are not alone.

Is there a cure?

Sadly, at the moment there is no treatment that can cure dementia. There are some medications that may help a person with dementia to think more clearly, but they don’t work for everyone and they do not cure the person. We hope that through the hard work of doctors and other researchers there will be a cure soon – or at least something to slow dementia down.

What types of dementia are there and how do they differ?

Here is a brief breakdown of some of the most common types of dementia.

How long does it last?

The rate at which any type of dementia progresses varies greatly from person to person. However, the symptoms will get worse as the disease affects different parts of the brain, and it does eventually lead to total dependence and then finally death.

People working in the field talk about ‘stages’ of dementia. In reality, it’s not that clear cut. There are a lot of differences between people and there can be good days and bad days in the way somebody is functioning. Dementia can look a bit different from day to day and even change depending on the environment. For example, a person might be able to look after themselves quite well at home, but when they go to a busy shopping centre, they might suddenly find it difficult to find words, remember where they are, and can become agitated and overwhelmed.

Although there is no particular point at which someone enters a ‘stage’ of dementia, commonly people talk about three main stages:

The Brain
Impact on you